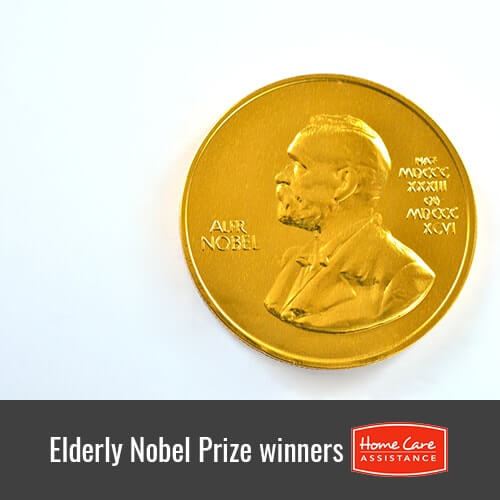 Though plenty of younger adults have won Nobel Prizes in various scientific fields over the years, there seem to be more and more winners each year over age 65. Jefferson County elder home care professionals discuss this modern trend and examine the reasons why it has become so common.

Profile of a Nobel Laureate

Today’s Nobel Laureate in a scientific field is likely to be older than his or her counterparts from the early part of the 20th century. The 2016 Nobel Prize winners for medicine, physics, and chemistry were all men over age 65, compared to an average age of 47 in the first part of the last century. This trend toward more mature Nobel Laureates started in the mid-1950s and continues through today.

This phenomenon may be due in part to an increase in the number of people currently working in scientific fields. According to Gustav Källstrand, a curator at the Nobel Museum, there were approximately 1,000 physicists a century ago compared to nearly 1,000,000 today.

The increase in the number of scientists also means there are more discoveries and breakthroughs vying for the Nobel committee’s attention. This means scientists may have to wait many years to win an award for a breakthrough that actually occurred much earlier in their lives. There is also some speculation that the amount of scientific information available today means breakthroughs are only possible after having the opportunity to read and process the information for a number of years.

The Effect of the Scientific Revolution

Quantum mechanics was an up and coming field a century ago, and many of the people interested in the field were young scientists. Even a relatively mediocre physicist could make a quick discovery that significantly advanced the field. The Nobel committee realized the importance of the field and wanted to recognize achievements quickly.

Trend Not Seen Across the Board

One of the reasons these older Nobel Prize winners have remained so sharp over the years is because they are constantly engaged in mentally stimulating activities. At Home Care Assistance, we believe boosting brain health is one of the major keys to staving off memory-related health conditions, which is why we specialize in Alzheimer’s and dementia home care Jefferson County seniors can rely on. For more information on our in-home care services and to schedule a no-obligation consultation, call (303) 987-5992 today.