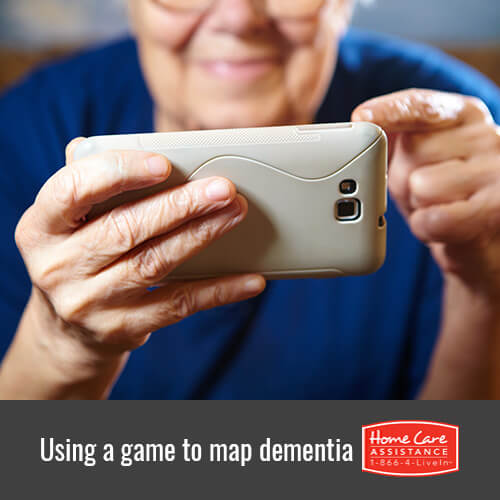 Imagine being able to aid scientists in developing a test for dementia. Globally, you’d help 47 million people diagnosed with the disease. By playing a new game developed specifically to help researchers learn more about dementia, you’ll be doing just that. Read on to learn more, presented by the Jefferson County senior care professionals at Home Care Assistance.

Sea Hero Quest was specifically designed by researchers to generate data regarding navigation skills. Researchers will use this information to discern the brain pathways involved in spatial orientation. Rather than using maps for guidance, players rely on perception and recall. The game will record orientation skills as players negotiate a maze of flares, landmarks, islands, and icebergs. Players also search for creatures in magical seas, representing memories.

Sea Hero Quest is the collaborative genius of several entities. The game’s scientific premise was developed at University College London and University of East Anglia in the UK. UK-based Glitchers and Germany-based Deutsche Telekom have designed and presented the video. Alzheimer’s Research UK is also supporting the project.

This study is the largest crowd-sourced data investigation on spatial navigation to date. The research will involve hundreds of thousands of game players worldwide. Its scientific predecessor was a study comprised of roughly 600 volunteers.

Scientists will analyze how players progress through the game’s levels. Just two minutes of playing time will produce five hours’ worth of research material. The speed of collecting information via the game is 150 times faster than with traditional methods like interviews and evaluations. This process will yield the data equivalent of 57 years of laboratory research.

Using the data, scientists will first identify the typical range of navigational skills. The next step will be developing guidelines to recognize the earliest signs of dementia. The goal is to develop a diagnostic test to catch the disease before it develops a mental stronghold. Dementia patients will then be trialed on drugs to stop disease progression. One way to evaluate medication efficacy will be to have patients play the game.

In the course of cognitive decline, maneuvering through personal environment is one of the first faculties lost. A senior’s “mental GPS” degrades, making a once-familiar world seem foreign. Currently, the mechanism of orientation loss is not well understood. In the future, researchers aim to conduct brain scans while people play the game. The scans will highlight which brain regions are active and pinpoint a normal pattern in the navigation process. Then researchers can identify what goes awry in the brain impaired by dementia.

Sea Hero Quest was launched on May 4, 2016 for Android and iOS smartphones and tablets. The game is free, available from the Apple Store and Google Play.

Learn more about providing a safe and comfortable environment for a loved one with dementia by reaching out to Home Care Assistance, a leading provider of dementia care in Jefferson County. Give us a call at (303) 987-5992 today. Our friendly and experienced Care Managers at available 24/7 to take your call.